Despite being very clever Jan was, by his own admission, a trouble maker at school and quickly dropped out of college.

He managed to get a job as a software engineer at Yahoo, but got bored and left before he was asked to leave. On his bio Jan writes “Did time at Yahoo.”
Disillusioned with life, Jan decided to go travelling for a year.
When he returned, Facebook and Twitter were two of the biggest gigs in town. Jan sent his CV, but was turned down by both companies.
So Jan decided to start a business himself. After a bin full of scrapped ideas, he decided to run with the very big idea of creating a hassle free instant messaging service.
WhatsApp was born, and in February 2014 Jan Koum sold WhatsApp to Facebook for $19Billion.
Jan Koum says he realises it was true what his school teachers and naysayers had said about him, that he lacked common sense. Koum says that it was uncommon sense that had prevented him from following the normal, common sense path to mediocority.
Remember, if you’re a misfit in one place, you’ll be a great fit in another.

Humour
When your neighbours put up their Xmas lights in November:

• An old couple are at church, when the wife leans across to her husband and whispers,
“I’ve just let out a silent fart, what should I do?”, to which he replies,
“Change the battery in your hearing aid”.
• The writer of ‘The Hokey Cokey” song has died.
It was a struggle getting him in the coffin.
They put his left leg in, then the trouble started. 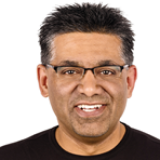